With Jack - Be A Confident Freelancer

With Jack was growing up. As far as bootstrapped insurance startups go, With Jack is a pretty well-known company, and quite beloved in the UK tech scene. This was squarely down to Ashley, who has steadfastly built With Jack from the ground up with a passionate and empathetic approach to customer development and the novel idea that you should give a fuck about the people your business helps.

However, as With Jack grew, the potential to empower freelancers outside of simply providing them with good as heck insurance presented an interesting challenge: how does a company known and respected for care and attention to a single product manifest that goodness in other areas?

The new face of insurance

The first step, it turns out, was to double down on what we're good at. 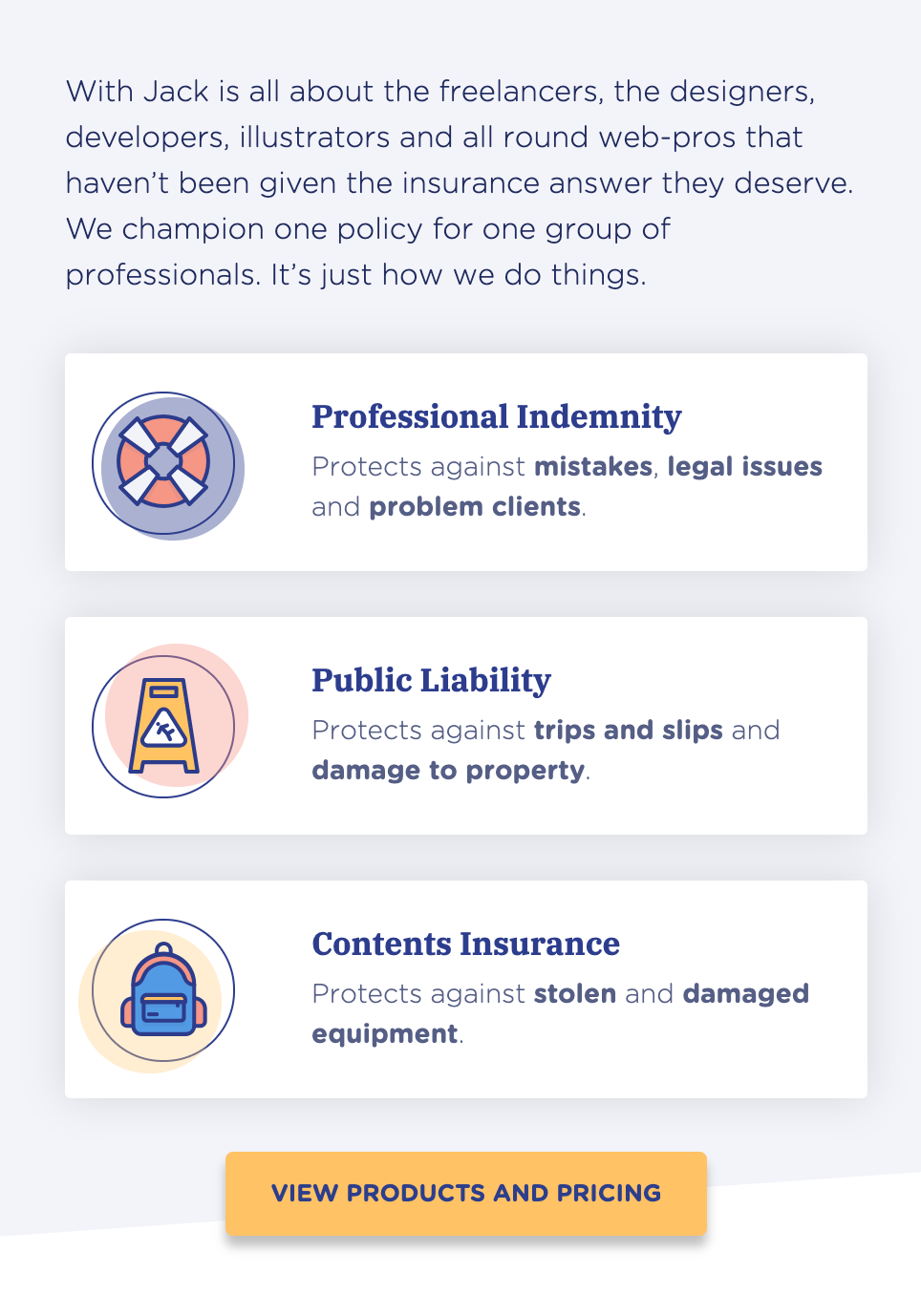 Furthermore, With Jack was approaching some exciting business transformations that would allow for much more automation with regards to policies, claims and insurance products. In short, a whole bunch of red tape that stopped us from being Our Best Fuckin Selves was about to get snipped to heck.

There's something special about the momentum that new possibilities can generate, even moreso when those possibilites arise from the dissipating bureaucracy that was previously gatekeeping you from making good shit and helping others. So, in preparation, With Jack got a bit of a glow up. 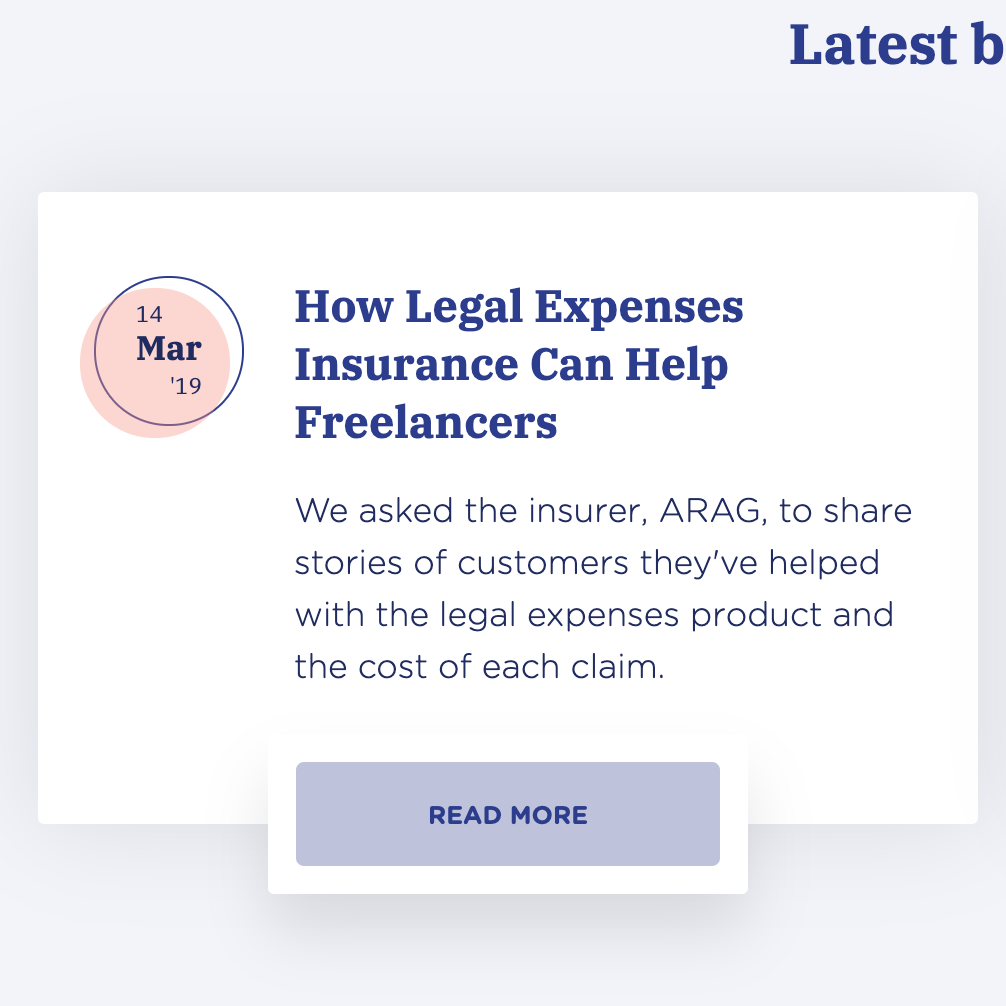 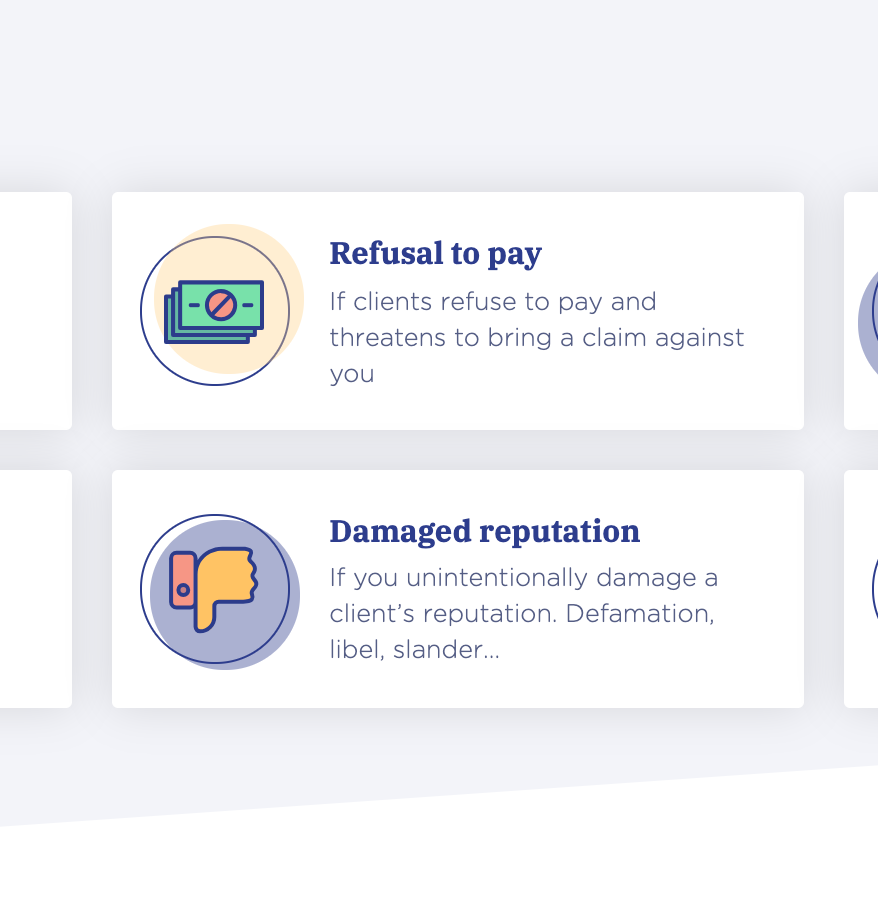 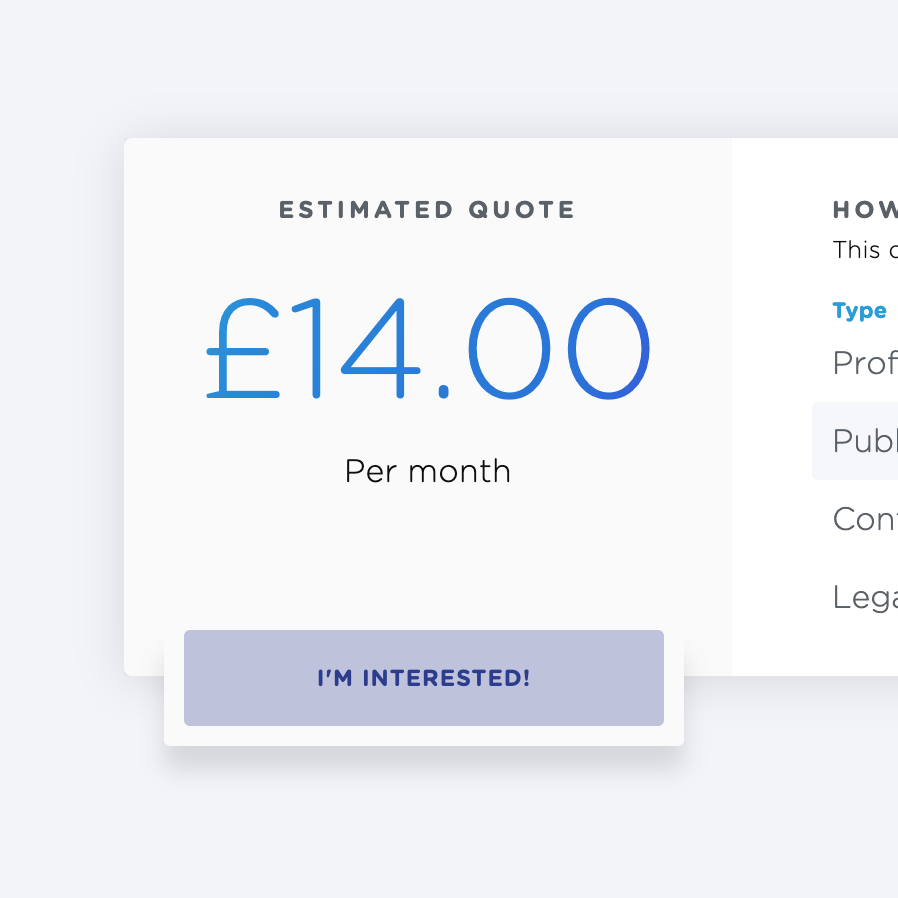 The incredible Vic Bell worked her magic on a new brand, and Sabine of From Scratch wrote up a veritable storm of compelling content, and I had the pleasure of smushing that all together into a new site without eating too much glue. I'll be honest, I don't usually do, and even more rarely do I enjoy, website work. Ashley, Vic and Sabine created the perfect storm for Maybe The Only Time In The Last Five Years I've Actually Enjoyed A Website Project.

Even then, I'm not gonna dwell on the site. It's a website. It's purple.  It's full of boss illustrations. Cool. What I really want to show off is the new onboarding.

Right so first off fuck you chatty interfaces are great. At a time when awfully-crafted chatbots and even-more-awful AI chat 'personalities' were teeming out the woodwork, some tit (me) decided a happy, chatty onboarding interface was a good idea. Spoiler alert: it kinda was.

Now, With Jack has a mascot. It's a mascot brand. Jack, the character, is core to With Jack, the company. With mascot brands, you’re forever on the cusp of Clippy. One slip in content, in animation, in interaction, and you go beyond cutesy approachability and straight into Dave Benson Phillips Covered In Gungey Brie levels of cheese. But get it right, and I think you can create some really charming, humble, and (whisper it quietly) engaging work.

The key to making this work, in this case, was to actively break ‘chatbot’ conventions. To hint that this interface is purely metaphor; that you’re not chatting to a bot, hoping it’ll guess your intentions, and so forth. This was achieved by using conventional form fields and a fill-in-the-blank approach to responses. Potential customers aren’t patronised. They’re not being asked to treat some hastily-assembled Messenger bot like it’s fucking Deep Blue itself. Here, they’re almost asked to be in on a joke. To suspend disbelief just enough to engage in something a little silly and monotony-breaking. 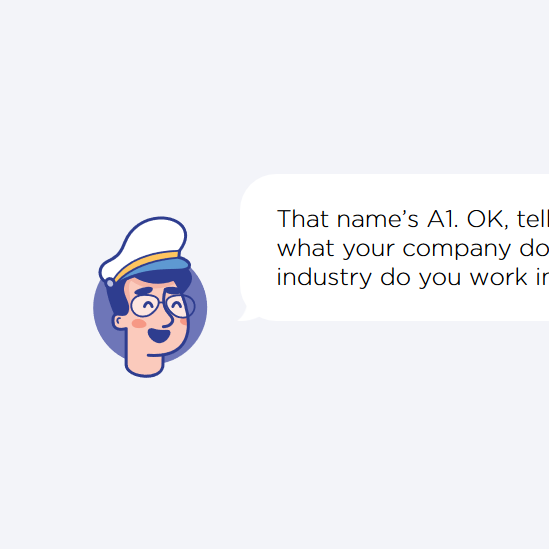 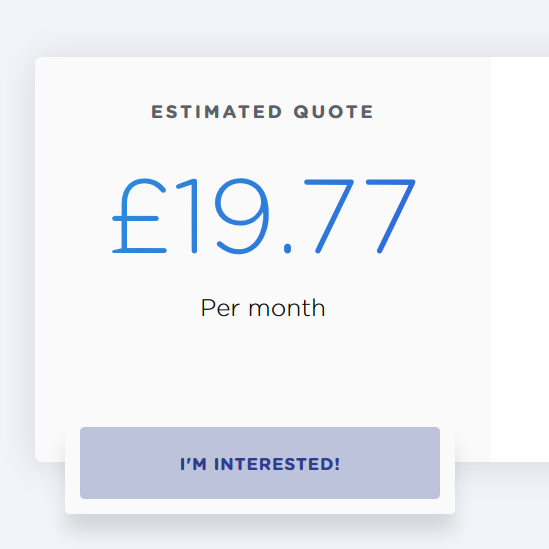 'Silly' is probably quite far removed from what one would associate with insurance, where stoic trustworthiness above all else seems to be preferred. But you get stoic trustworthiness from any of the big insurers. You get it from the half-dozen startup insurance companies that started and folded in the past few years. With Jack is represented by a cheeky sailor who saves people with dinghy-shaped beanbags. Working fun and silliness into the dry, bureaucratic world of insurance felt right.

And we made it work. The new onboarding interface increased conversions. People enjoyed it when we got to watch them use it. Literally no one mentioned Clippy. Sound.

Site, brand, onboarding. Boshed. But both myself and Ashley knew that this was just the first step to achieving her goals of empowering every gosh darn freelancer in the known universe. And like any decent founder, Ash had a whole host of ideas for new products and features.

We worked together, in a prototypical version of what would become my Mindful Design Sprint, and mapped her whole product ecosystem, including her new ideas (and a few more we came up with through the process, for good measure), with a complete systemic overview. We then broke that down into key moments, looking closer at the high level interactions freelancers would have with components of this system. Alongside this, we used Ashley's extensive customer development work, which included tonnes of interviews and ethnographic research findings, to explore a problem space that we thought to be under-addressed: freelancers struggling with business and admin clusterfucks (we may have worded it a bit more pragmatically tho).

All of this early-stage exploration let us put together diverse personas, empathy maps, storyboards and very early wireframes, which I then took into design prototyping.

We're currently hard at work on making the new With Jack dashboard as great as we possibly can, it's the culmination of all the explorative work we've done so far, and it's gonna be lush. As we're mid-way through this process I don't want to share much that could change and/or spoil some of the new shit we're working on. 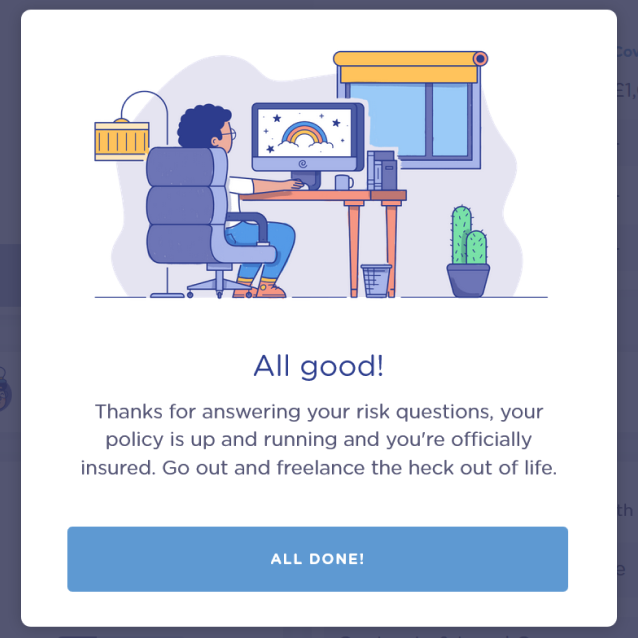 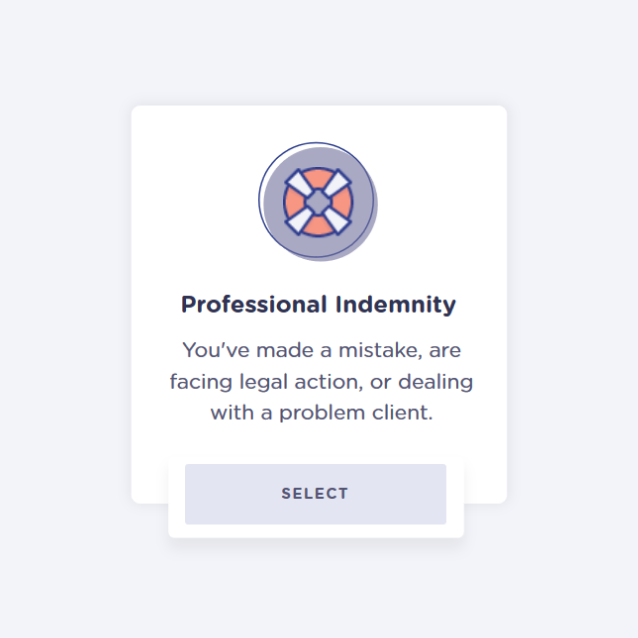 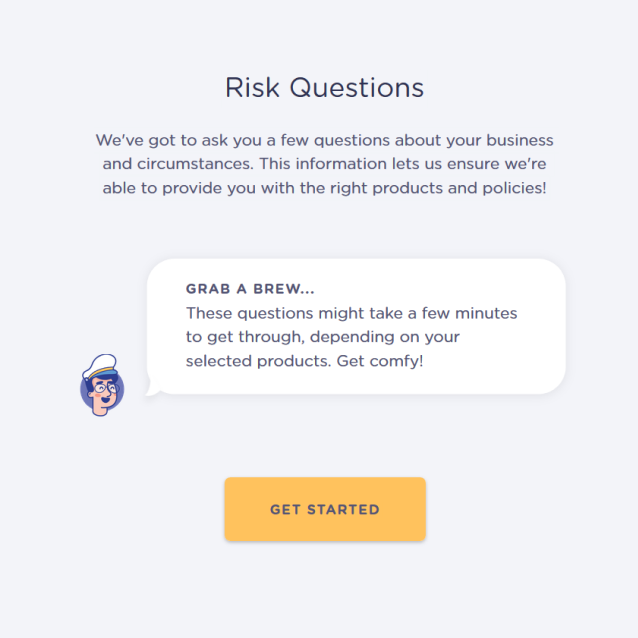 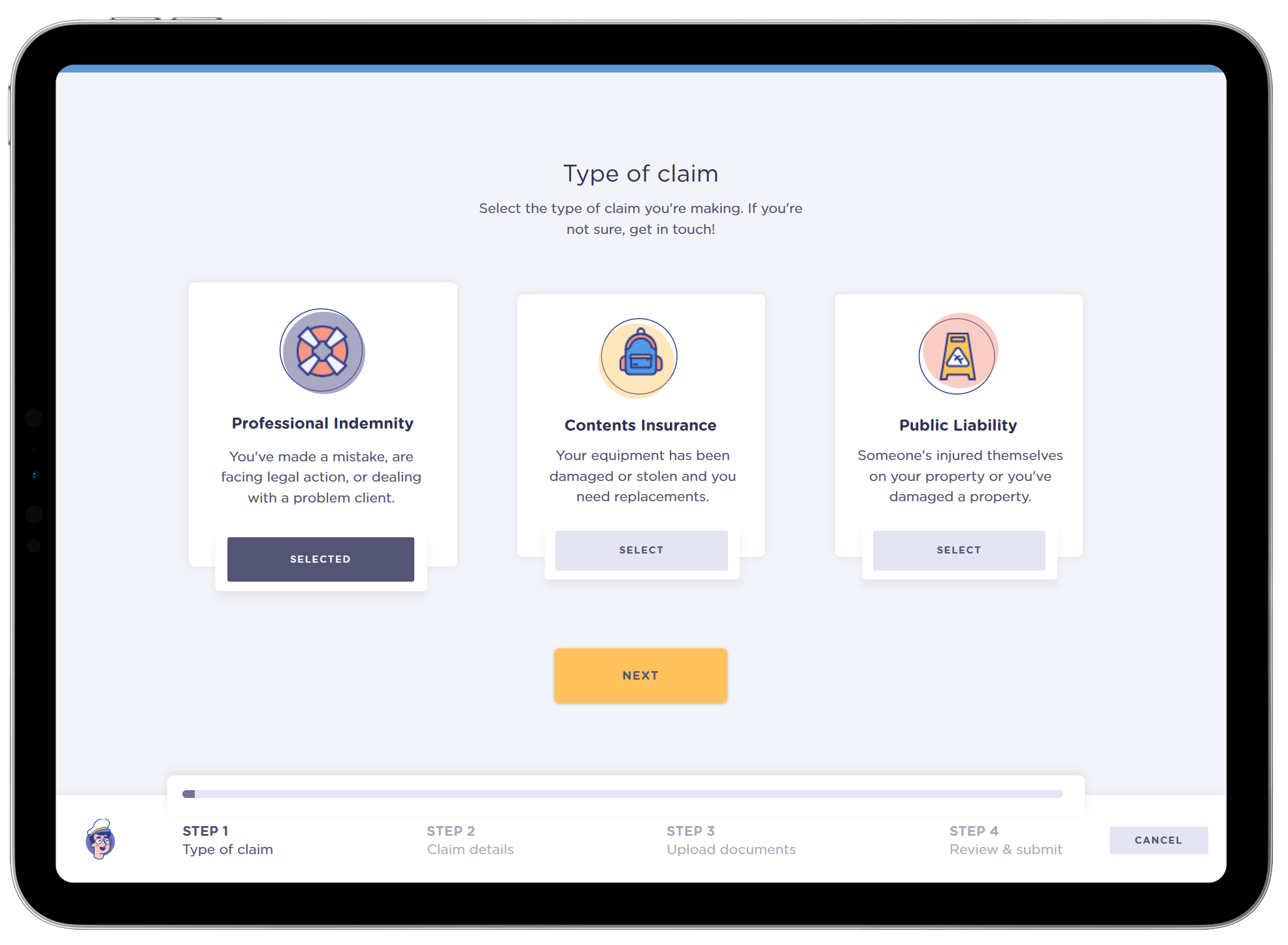 Want me to design some stuff? Interested in booking me to speak or lecture? Wanna tell me how much you love my face? Say hi.

Get in touch
©  Forever and ever til the end of time